Howdy friends, we are temporarily closed due to the COVID-19 pandemic. Big Red F is offering curbside pick-up & delivery at select Front Range restaurants. Visit www.bigredf.com for more information. We thank you with our whole hearts for your support. You are helping us keep afloat during this pandemic. 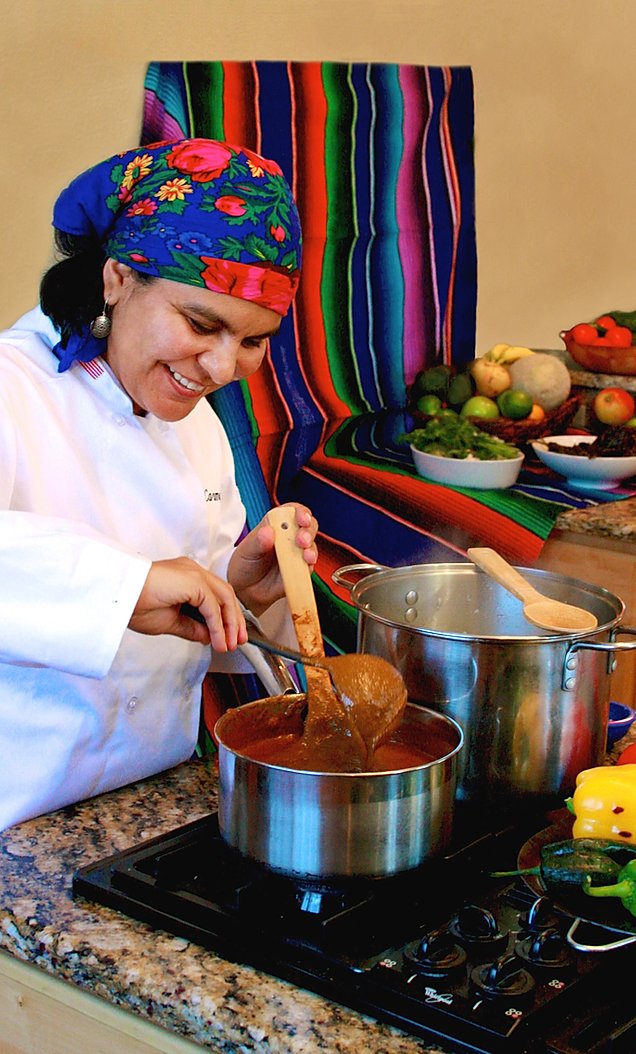 Growing up in Sonora, Mexico, Carmen Pacheco-Borden remembers eating mole—a dish based on a thick, richly flavored sauce—for dinner at least once a month. Like many Mexican families, their mole typically came from a jar. The prepackaged Doña Maria brand was their go-to, meant to offer convenience and ease for busy families.

As an adult living in Boulder, Colorado and fixing dinner for her own family, Carmen soon realized that prepackaged mole sauce was anything but convenient. “You always had to fix it,” she says, “by diluting it with fresh chicken broth or adding crumbled crackers or bread to achieve the proper consistency.” Even worse: Carmen noticed that the jarred sauces contained preservatives like sodium benzoate to keep them shelf stable.

So Carmen embarked upon a serious mission to create a better sauce. She took time away from her career as a professor of chemical and mechanical engineering at the University of Colorado Boulder to embark upon a culinary journey to Oaxaca, Mexico—the birthplace of mole. There, she learned the secrets behind real-deal 30-ingredient mole negro. “It was an eye-opening experience,” she says. “Tasting the real thing compared to the jarred version was like lemonade from fresh-squeezed juice versus a powdered mix, or freshly roasted Ethiopian coffee versus Folgers.”

Upon returning to Boulder, Carmen utilized her scientific skills to create her own unique, health-conscious mole sauces modeled on the versions she tasted in Oaxaca. Carmen realized that the freshly ground spices and nuts in the traditional mole were so flavorful that there was no need to add crackers or bread, making the sauce completely gluten-free and vegan. She also sweetens her sauces with plantains and raisins rather than sugar and to sell them frozen to eliminate the need for added preservatives.

In 2015, Carmen began selling her three moles—Oaxacan, Pipian Verde, and Sonoran Red—at the Boulder County Farmers Market under the Carmen’s Salsa name. That’s how we first became acquainted with Carmen. Not only are her sauces delicious, but we were fascinated by the way Carmen approaches food from a scientific background. Carmen’s interest in promoting sustainable food systems and local farming spills over into her work at CU Boulder: She instigated a hands-on class on the Design of Coffee and has plans to introduce a craft beer class and food engineering class as well.

We’re thrilled to have Carmen in our kitchen on March 8 as we host a multi-course mole tasting dinner. Diners will receive a guided regional exploration through the moles of Mexico from Carmen herself, as well as paired cocktails. And while this event sold out, we’re featuring Carmen’s Oaxacan, Pipian Verde, and Sonoran Red moles as specials at Centro throughout the month of March.